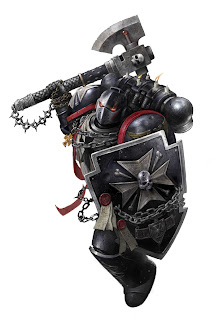 Sorry for the long absence and laxity in posting but (insert excuse here).

So, Caledonian Uprising 2012 has been and gone.

I read all the advice I have received over the last few weeks and decided on the following list;


Yes, the list is very low on troops but this list wins by stopping my opponent from scoring and with 6 Typhoons and the Terminators pouring fire on and a Land Raider full of Assault Terminators my opponent should be leaving them alone.

I am afraid I'm crap with names and I'm not very good at battle reports so Ill write a brief synopsis of each game and how I did. If I have forgotten your name or got your army list wrong I apologise ahead of time.

To be honest I felt bad this game, he had not played 40k since 2nd or 3rd edition I think and I almost tabled him by the end of turn 6. I had to help him with the rules, point out where had could get cover saves by moving cleverer. He also had appalling luck, nothing he did seemed to work for him, my assault terminators did for 10 marines, 2 5 man Terminator squads, Belial and his God Hammer. I lost only the cyclone Terminators in return.

I made a MASSIVE mistake with this game, the fear of being lashed by the prince made me deploy very defensively and even deployed my Raider right at the back. Instead of dealing with the Prince early I poured fire into the oblits and did nothing. His dice were on fire, he made 15 5+ invulnerable saves on the oblits that game and it wasnt until I got the assault Termies into them I killed something, then he lashed them away and it rinsed and repeated, lash, plasma, lash , plasma .... 20-0 loss. very dissapointing, had I gone for the Prince early perhaps I could have scored a drawer from it. who knows. He played well and won.

I thought this was going to be very very tight, he had as many shots as I did and his list was more resilient to Krak Missiles than mine. I got first turn and I got lucky, Las Cannon shot into the Termie on his left flank caused them to run off the board turn 1 and then turn 2 multi assault into the remaining 2 terminator squads and his marshal smashing them. His chump and the 8 man squad he was with took 50% casualties and ran. The terminators cleared up 3 of his small squads and I torrented the remaining one off the board. My Tank hunters killed his dread all by turn 4. Turn 5 saw me table him in good order.
This guy got my sportsmanship points for the weekend, despite the utter thrashing I gave him he remained an absolute gentleman, pointing out where my units could do a bit more and reminding me of things I had forgotten.
Win 20-0

By the end of day one I was on 39/60 points and pleased with myself.

I was not looking forward to this match up, not at all, Gary is an awesome player and I have played this army before at Blog Wars and barely scratched a draw against it. I had an edge however, his hangover....and as it turns out his appalling luck!!!

The man of the match this game was the Marshal and shall tell you why. Gary deploys all but one of his units to slog on, Belial and his unit drop in front of my line scattering 2 inches towards me. I take a chance, move the landraider on 12 and deploy the Assault Termies and attempt the charge through cover, I needed a 5 and got it. Turn one combat, my Assault Terminators smash through the unit leaving Belial on his lonesome. Gary lost 7 or 8 terminators to massed fire over the next couple of turns. His dice were appalling, he failed loads of 2+ saves, couldn't kill my speeders, and generally had a terrible time of it. My Marshal spent 7 turns in assault, he killed 8 or 9 Terminators on his lonesome dying on the final turn to fearless wounds. Gary had one chance in the final turn to contest both my objectives but didn't manage to roll what was needed Truly Epic. At game end he had 2 Terminators remaining, I had 2 objectives to his 0. Win 18 - 2.

The list looked a bit like a store friendly list so I was hopeful, Peter is a player well out of my league as the game played out it became apparent how outclassed I was.
I won first turn and he reserved everything. He then proceeded over the next 6 turns to disassemble my army. It was horrible, nothing I did went to plan and the librarian had 2 of my troop units running off the board being escorted off by scout bikers by the end of turn 3. Mephiston didn't show up till turn 4 and there was nothing really for him to do. The only thing that stopped this being a 20-0 loss was the assault Terminators (again). I got them into mid field and began to smash through units. They did for a unit of scout bikers, 2 x 5 man Squads, a Rhino and they were still whittled down and Sgt Corbolio managed to finish the remainder of the squad off buy himself on the final assault phase. Throughout the game I was outplayed, out shot and out assaulted. I learnt loads from this game despite getting a thorough spanking. Loss 17 - 3.

I had lost to my round 5 opponent and Gary had tabled his so we were on the same points and in the final round we get a rematch...I was a bit nervy about this one as Gary had recovered from the night before and thirsting for revenge. He wins first turn and does something I've never seen before. He sets up all 5 of his Terminator squads in lines with the cyclone launcher at the front and the other 4 Terminators in a line behind them, each squad one inch from the squad next to it, he clearly didn't want to have to deal with my Assault Terminators. By charging the "phalanx" of Deathwing Terminators I could hit only one or two units and then be on the receiving end of 3 assaulting Deathwing units the following turn. I opt to reserve my entire army rather than deal with the cyclone spam and massed rockets for the rest of my army . He moved forward on turn one and two breaking up the formation a little. He moved onto 2 of the middle board objectives so was winning. My turn 2 I got a speeder unit and a crusader squad, the speeders put frag and bolter shots into his Phalanx and caused a couple of casualties loosing a speeder and the whole crusader squad in return. My turn 3 I got everything but 1 speeder and a crusader squad and began to pile the frag into his packed in Terminators, Gary was failing 2+ after 2+ and I think I did 7-8 casualties loosing a couple of marines and some weapons on speeders. more exchanges of fire tun 4, the only thing that happened of any not was my Champion left the raider to deal with a lone terminator on the left hand objective and died to an uppercut from a lone terminator that shrugged off 4 wounds. Turn 5 he killed my Raider midfield, the resulting explosion killed one of my cyclone Terminators allowing them to roll up to support the coming assault on the centre objective, I poured more fire into the Phalanx killing another 5 or 6 with frag, storm bolter, heavy bolter and lascannon fire. I stick a lone speeder on the left table objective and shove the assault terminators and the Cyclone terminators into the remains of the Phalanx and drive it back from the objective. If it ends now I force the draw I might loose this if it goes on another turn. Gary rolls the dice, game ends. Draw 10-10

Overall I had a great tournament and enjoyed myself immensely I finished 18th out of 116 players which is my best big tournament result and won best Black Templars General and received a certificate and a £5.00 voucher for Maelstrom Games (there were only 3 of us). This is on my list of tournaments to attend next year, if you haven't been you should. Its well worth going to, competitive and very, very friendly its well run at good location with onsite food and drink at good prices.

Thanks for reading
Posted by Von Muller at 14:10